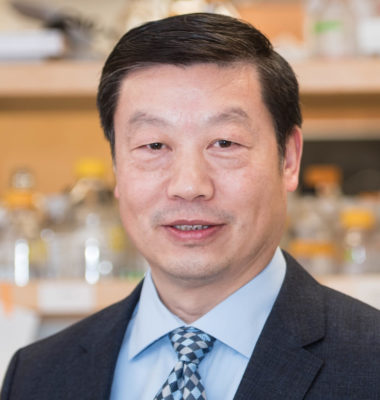 Dr. Weihong Song was trained as a clinical psychiatrist and molecular neuroscientist. He received his medical degree from Chongqing Medical University in 1983. After completing psychiatry residency and research program with a Master of Medicine degree at West China University of Medical Sciences in 1986, he then worked as a clinical psychiatrist and a Lecturer of Psychiatry at West China University of Medical Sciences. Dr. Song received a MSc in psychobiology and behavioral genetics from Purdue University in 1993 and a PhD in medical neurobiology and molecular genetics from the Department of Psychiatry at Indiana University School of Medicine. He did his postdoctoral training in the Department of Neurology at Harvard Medical School and the Children’s Hospital (1996-99), and worked as an Instructor at Harvard Medical School (1999-2001).

Dr. Song is recognized internationally as one of the world’s leading researchers on Alzheimer’s Disease. He is the Tier 1 Canada Research Chair in Alzheimer’s disease and a Full Professor with tenure at the UBC Department of Psychiatry. He holds the Directorship of Townsend Family Laboratories and serves as the Special Advisor to the President on China at UBC. His lab has made major contribution to the understanding on how BACE1 and ?-secretase regulate APP processing and their role in Alzheimer pathogenesis and drug development. His recent work also defined the molecular pathways contributing to AD pathogenesis in Down Syndrome.

He has served on numerous international grant review panels and journal’s editorial boards. For his contribution in forging crucial Canada-China collaborations on research and education, he received the 2011 “Friendship Award”, China’s highest honor for foreign experts. Dr. Song was elected to Fellowship in the Canadian Academy of Health Sciences (CAHS) in 2012, one of the highest honors for members of the Canadian health sciences community.

Apply to be a full or associate member of the Centre.