Congratulations to DMCBH members Drs. Shannon Kolind and Tamara Vanderwal, who have both been awarded grants in Brain Canada’s 2020 Future Leaders in Canadian Brain Research Program.

Multiple Sclerosis (MS) is a disease that attacks the nerves in the brain, making it difficult for the brain to send signals to the rest of the body. MS symptoms are extremely variable, and can include difficulty walking, fatigue, pain, and cognitive issues such as problems with concentration, memory and word-finding. People living with MS have scars, or lesions, that can be seen in the brain using magnetic resonance imaging (MRI). MRI is essential in MS care, for diagnosis, detection of new lesions, monitoring disease progression, guiding treatment decisions, and for use in clinical trials of new drugs. Unfortunately, MRI scans are expensive, have long wait times, and are often inaccessible for people in remote locations or who have difficulty with mobility or transportation. Many people cannot have an MRI because they are claustrophobic, or have something in their body that is not safe for MRI, such as certain metal implants or pumps.

Hyperfine is a company that has developed the world’s first portable, easy-to-use MRI system. It has a much lower magnetic field than typical clinical MRI scanners, costs much less, fits in a cargo van, and can be set up easily using a standard wall outlet. Since it has a low magnetic field, is portable, and only covers the head, it can be used by far more people than standard clinical MRI scanners. Dr. Kolind’s team received a Hyperfine point-of-care low field MRI scanner in July 2021. Currently, the types of scans possible using this scanner are limited but her team’s short-term goal is to modify MRI techniques for low magnetic field, which requires distinct physics from those at higher field strengths, and prove their utility for use in MS. The longer-term goal is to provide improved patient access to MRI to enable faster diagnosis and better disease management.

Brain scans from MRI machines are an important research tool for studying psychiatric and neurological disorders in children. MRI lets us study brain structure, and functional MRI (fMRI) lets us also study brain function. In fMRI, each child’s brain images need to be lined up in a special way so that proper comparisons and statistical tests can be done across everyone in the study. This important step, called alignment, happens in every fMRI study of every disorder. Usually the alignment is done using physical landmarks, meaning each brain is lined up according to structural features. In children, alignment is challenging because of differences in size and shape across brains.

Recently, a new way of doing alignment has been developed. Instead of using structural landmarks, researchers have started using the functional signal to do the alignment. So far, this procedure—called “hyperalignment”—has worked better. For example, when tests are done using both methods, the hyperaligned data could predict age and other things about a person with better accuracy. This is sort of similar to using a new photo processing step that results in clearer photographs, so you can see details and recognize faces that were blurry before. Hyperalignment could have an enormous effect on pediatric fMRI studies. It has not yet been tested in children because it requires long brain scans with very low head motion for which children struggle to stay still. Dr. Vanderwal’s project overcomes this limitation by using movies in the scanner. The movies help children stay still, and also drive brain function in useful ways. These data will be innovative and unique, and can be shared with other researchers. Dr. Vanderwal’s team will also use the data to test hyperalignment in children, with the goal of making it a method that could significantly improve pediatric fMRI research overall.

Unlocking the mysteries of concussion and the brain

New UBC research could make diagnosis, treatment and prevention more effective for everyone —...

The BC Knowledge Development Fund (BCKDF) has announced funding to support research infrastructure and... 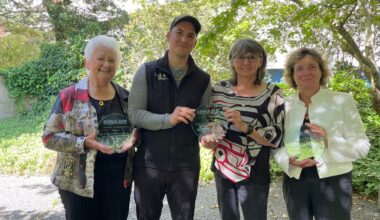